skip to main | skip to sidebar

Wow! It seems as though the item that was featured on the etsy front page yesterday has been featured in the geekery gift guide today! Fantastic! Here's the mini:

And you can check out other fabulous items in the Geekery gift guides here.

What a great start to a Monday morning!

Ni hao all!
One more important thing that I wanted to blog about today and that is that Ma Cobb is going on vacation!! I will be going out of town for two weeks in July! Therefore I will be temporarily closing down Ma Cobb's Hat Shoppe from July 14th-28th.
So what does that mean? That means that my last day for shipping is going to be Monday July 13th, so if you REALLY REALLY REALLY need a Jayne hat or some buttons, I encourage you to order within the next week, or over next weekend at the VERY LATEST!
The shoppe will be re-opened again probably around July 29th (or whenever I recover ;) ). And you will be free to order once more. :)
I'm really hoping that this won't inconvenience anyone! This will be my first significant time "away" from my shoppe since I started selling, so I'm really looking forward to some R&R! I have a feeling I won't know what to do with myself without a pair of knitting needles in my hands, but I'm sure I'll manage. ;)
Stay shiny all,
Love,
angela aka Ma Cobb
Wave from: Ma Cobb at 7:42 PM No comments:

I woke up this fine Sunday morning and one of my brand new button listings had 134 views! I guess it was featured as an alternate on the front page of etsy early this morning! Yay! This is my second etsy front page feature, so it is still very exciting for me! You can see the collection of lovelies here, thanks to craftcult:

And I suppose I should take this opportunity to probably mention that I do have a few shiny new listings in my shoppe, including the above featured listing! I've got two new CUSTOMIZABLE button packs in my shoppe! There's a six-button set, and a ten-button set. I've had so many requests for mixed and matched combinations of buttons that I figured it was probably a good idea to make it a little easier on people and just make a mix and match listiing. Rest assured, I've still got all character-themed button sets in my shoppe, but now those who want different combinations of buttons also have options. So if you were thinking that you perhaps wanted a Wash button as well as a Jayne button, and a few Kaylee buttons there's a customizable listing just for you! :) 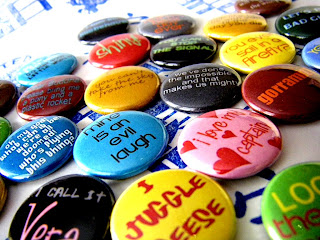 Along with the custom button packs, I've also listed two customizable MAGNET sets for those who don't really wear buttons, but still would like to have a few Serenifly accessories for the fridge, or for the filing cabinet at work. There's a six-magnet pack and a ten-magnet pack. So if you wanted that set of Jayne buttons made into magnets the six-magnet pack is the listing for you. Or maybe you wanted a few Frak magnets, and couple Dollhouse magnets, and a few Serenifly magnets. Well then, the ten-magnet set is probably what you're looking for! So many options! 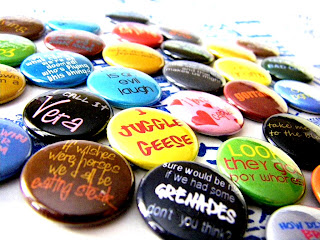 Alrighty, I should probably get back to knitting now. It's been awhile since I've blogged, so I'll probably be back shortly with more news. June was a very busy month for me (thus the sparse blogging) with the CSTS screening in Toronto and a couple of other wholesale orders that I was working on. I do have a few other tidbits of news that I'd like to share, but I'll save them for a later post. So stay tuned. :)

Ma Cobb
Ma Cobb's Hat Shoppe is the place to go when your noggin is craving a very cunning orange hat! I knit sweet hats just like Jayne's! And after I'm finished knitting them, I package them in straw and send them out to you with a loving note from Ma (along with many other little goodies)! Questions? Email me at fadingendlessly[at]gmail.com. Or visit one of my shoppes below!

Ma Cobb on the cortex:

Promote Your Page Too