skip to main | skip to sidebar

I posted some new button packs in the ol' shoppe this week: character quote packs! So far I've got: 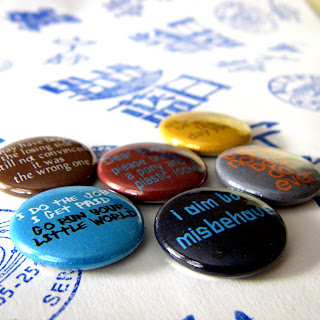 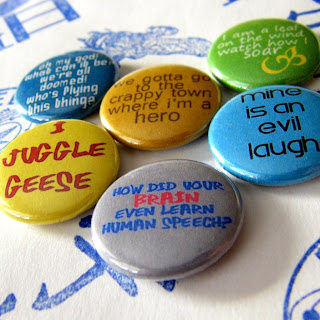 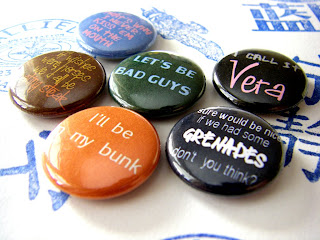 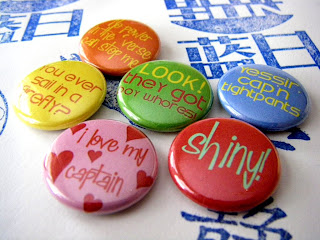 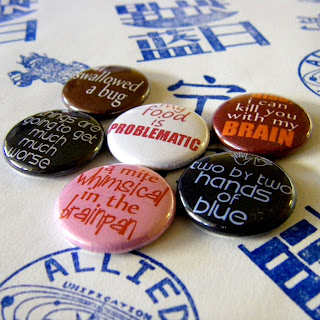 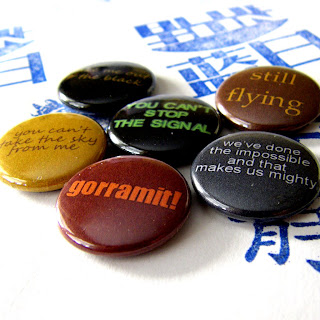 I'm quite proud of these new little guys!

I'm also working on sets for the rest of the characters (Simon, Inara, Book and Zoe), but it's taking me a bit more time. Perhaps because these characters don't get quite as many good little one-line zingers? Every time I try to rack my brain to come up with good quotes for Simon or Inara, I only seem to remember another line from Mal or River (which probably means I'll be making up more quote packs for Mal and River, tee hee)... Anyway, I'll be working on the rest of the characters in the next week or so, and should be posting their sets soon. :)

In the mean-time if you would like to help me out, there might be a shiny button in it for you! Ma Cobb's Hat Shoppe is having a little Quotes Contest! If you have any good quote suggestions or ideas for Simon, Inara Book or Zoe, here's what you need to do to win:

Email your quote suggestions to me at fadingendlessly[at]gmail[dot]com and be sure to put "Quotes Contest" in the subject-line. If your quote suggestion is deemed worthy enough to become a shiny little button in my shoppe, then I will send you that very same little shiny button (or buttons, if you suggest one or more amazing quotes)! :) Here's the info that I'll need from you

1. Any and all quotes by (or about) Simon, Inara, Book or Zoe. These quotes can be from either Firefly or Serenity (or both ;)). Quotes should be about MAXIMUM 15 words long (think of how much I can squish onto a tiny little 1" button). Less is more. :)

Winners will be announced on my blog, to receive all the glory and bragging rights!

Any other questions, just let me know. I look forward any and all suggestions!

I've been working on a few new buttons here at Ma Cobb's Hat Shoppe, but unfortunately they're taking a bit longer to perfect than I would have hoped. I was going to debut them as a give-away this month, and then put them in my shoppe in April, but my time-line has gone a little bit askew. Anyway, this is all just to explain why the March Free Give-Away hasn't been revealed yet. So I think I'm going to extend the popular February Give-Away for March, and then reveal the new buttons next month. :) 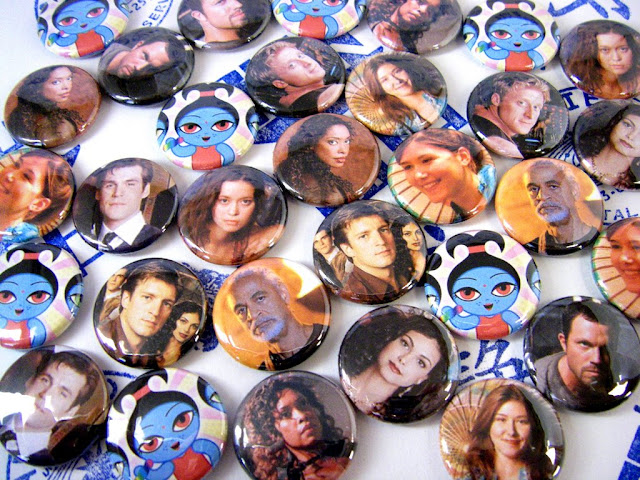 So then, for the March Give-Away, just take a look at all the shiny pics from the February Give-Away. Choose three (3) of your favourite Big Damn Heroes, and write their names in the "Message to Seller" section when you're checking out at fadingendlessly.etsy.com. That's all you've got to do to get three free BDH buttons! Easy peasy!
Hope this is enough to tide over the masses until next month when I debut an all-new set of Serenifly buttons! Cross your fingers that the wait is worth it! ;)
Stay shiny,
Love,
Ma Cobb
Wave from: Ma Cobb at 5:59 AM No comments:

Ma Cobb
Ma Cobb's Hat Shoppe is the place to go when your noggin is craving a very cunning orange hat! I knit sweet hats just like Jayne's! And after I'm finished knitting them, I package them in straw and send them out to you with a loving note from Ma (along with many other little goodies)! Questions? Email me at fadingendlessly[at]gmail.com. Or visit one of my shoppes below!

Ma Cobb on the cortex:

Promote Your Page Too